Notable Buses And Coaches In History 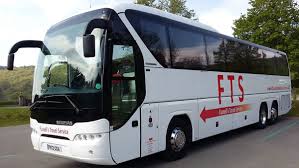 By virtue of carrying dozens of people per journey, a coach hire is often one trip away from becoming famous, and whether it is due to a notable appearance, historic event that took place on it or an enduring design, some buses and coaches are immortalised in history.

Here are some of the most famous buses and coaches of all time.

Whilst the former 1939 school bus could possibly have been better served staying in school given the misspelling of its name, ‘Furthur’ was one of the biggest symbols of the counterculture movement of the 1960s, although the name was quickly corrected.

Ken Kesey, the author of the book One Flew Over The Cuckoo’s Nest, wanted to travel from California to New York with a group of friends dubbed the ‘Merry Band of Pranksters’, so they bought an old school bus and customised it into a travelling commune.

It had a generator, sound system, rooftop seating and railings, bunks, a bathroom and a kitchen with a fridge and stove before the Merry Pranksters painted the iconic psychedelic colours onto the bus.

Mr Kesey filmed over 100 hours of silent film and unsynchronised audio tapes for a film that was never released, and their antics led to a wave of other brightly colours buses, most notably the Beatles’ Magical Mystery Tour.

A second bus was made in 1990 but campaigns have been set up to try and restore the original.

On the face of it, this bus is no different from any of the dozens of other GM old-style buses, but what makes it famous is what happened on 1st December 1955. Rosa Parks refused to move from her seat in defiance of a racist law enforced in Montgomery, Alabama.

She would be arrested for this, but this act of injustice would be one of the sparks that began the Montgomery Bus Protests, which would be the first part of a wider civil rights movement in the United States.

The bus was bought by Henry Ford Museum for $500,000 in 2001, as a reflection of its historical importance.

Known sometimes simply as the Double-Decker bus, the bright red Routemaster buses are so famous in their design that they are occasionally used as a symbol of the United Kingdom itself.

Part of the reason for this was sheer longevity; despite only being built for 14 years, the buses were in service for nearly half a century, finally ending full service in 2005.

Sometimes melancholically described as the ‘Magic Bus’, the abandoned Fairbanks International Harvester K-5 bus had been abandoned in 1961 on Stampede Trail near Denali National Park in Alaska.

It is possibly best known as the backdrop for the last known picture of Christopher McCandless, also known by the nickname Alexander Supertramp, a young adventurer who graduated from university and decided he wanted to live a simple life of adventure and living off the land.

Despite his youth and inexperience at survivalism, he tried to survive the infamous Alaskan bush at some point in the summer of 1992 but sadly was found dead on 6th September by a group of hunters, caused by either starvation, malnutrition or a poison that exacerbated both.

The story has since been immortalised in the book and subsequent film Into The Wild. The bus has since become a pilgrimage site for hikers and a plaque has been placed inside it. It has since been moved to the Museum of the North.