What Was The First Coach Service In Existence? 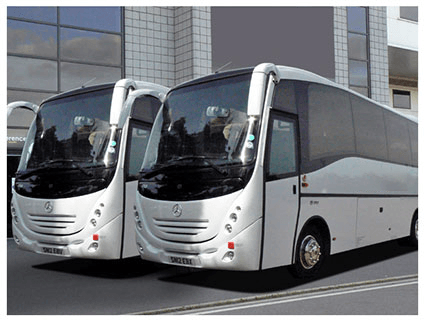 The tradition of coach hire and travelling by coach spans over 500 years, and has helped millions of people to see the world through that time.

Whilst there has been far less travel for pleasure this year, the roll-out of a vaccine should help to get people back out on the road by 2021. In the meantime, as we prepare for our Easter and summer getaways, here is the story of the first Coaches in existence.

Travelling by coach predates the modern luxury coaches available now, as well as the internal combustion engine, the industrial age and the concept of a smooth road, beginning in the period in which William Shakespere was writing plays.

At its basic level, a coach is a transport service that uses a bus or coach to take people from one place to another, and before the engine, that power came from a pack of horses or mules.

Whilst the first coach depicted appeared in a manuscript in the 1200s, the first stagecoach route began in 1610. The route, taking travellers from the hustle and bustle of Edinburgh to the sunshine of Leith, was far from the luxury and comfort of coaches today, with muddy roads, wooden wheels and no springs.

Over the next 40 years, a gradual development of coach routes began to take place, with the primary route going between Liverpool and London. Unlike today, where a Liverpool to London coach would take just a few hours, this coach took ten days assuming no accidents or bad weather.

It has a profound effect on people’s lifestyles and culture, as what was an often prohibitive journey was one that, whilst still lengthy was very much possible. Across the major stagecoach routes, coaching inns would spring up as a rest point.

These themselves became cultural hubs and William Shakespeare’s first plays were performed at these coaching inns before the construction of The Globe.

What was the most profound difference in these early days was that it democratised transport. In the past, travelling was either painful or prohibitively expensive, but for a shilling every few miles you could travel across the country.

The rides would eventually get more comfortable, with suspension springs being added to coaches in the 1660s and lighter, spoked wheels with brakes were introduced around the same time.

With better control and comfort also came greater speeds, with the Flying Coach being able to travel from Manchester to London in four and a half days in 1754. Just three years later a Liverpool coach cut the time to three days.

There was a somewhat iterative development of the coach infrastructure, such as turnpike trusts, better roads and stronger coaches.

They remained the primary transport solution in the country until the development of the railway in the 1830s, however, they remained around for journeys, ceremonies and excursions before gaining a new lease on life in the 21st century.

By 1911, England had created the first motor coach, and the benefit of a rail strike in 1919 meant that coach services were revived once again to provide flexible, affordable transport.